What is a Document? (Part II)

In a prior blog, I discussed the evolving and fluid concept of “what is a document?”

The following spreadsheet demonstrates one aspect of the issue on simplified facts.

Assume that an accountant is being deposed about a spreadsheet that the accountant prepared many years ago, and the issue is the manner in which present value was calculated.

A static version of the spreadsheet, such as a paper printout, as depicted on the left side, below, shows the years covered, income stream, and the calculated present value of $827,707.14.

Would it be fair to interrogate the accountant using the static version, asking “please explain how you came to the conclusion that the present value of lost income is $827.707.14”? 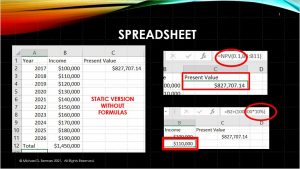 Either fact could be important in litigation.  It is not difficult to imagine either an objection, as discussed in the prior blog, or the accountant responding: “I can’t answer your question based on what you are showing me.  Many years have passed since I prepared this spreadsheet.  If you showed me the Excel spreadsheet with the embedded formulas, I could easily explain.”

As in any deposition, the deposing party should make the initial decision. Just as, at trial, the party seeking more complete presentation has the burden of making a timely objection, the deponent should have the burden of presenting a “completeness” objection during a deposition. Because it is likely that the objection would be viewed as an objection to the form of the question, and one that could be obviated by the interrogating party if timely made, it is likely that a failure to present the objection would waive it. An objecting party should state an objection with sufficient particularity to present the issue, recognizing that courts retain substantial discretion under FRE 106.

Id. at 717 (notes omitted).  Depending on the circumstances, it may be prudent for a deposing party to be prepared with the embedded formulas.  And, as pointed out in the book, the best solution is a Rule 26(f) conference of the parties to cooperatively address the issue before the deposition begins:

It may be advisable to either reach an agreement in advance of a deposition or, if agreement is not possible, at least to give an opposing deponent advance notice of the interrogating party’s intention to use less than what may arguably be a full document and not show metadata, tracked changes, spreadsheet
formulae, and so on.

ABA Article Suggests a Need to “Preserve Everything”