Maryland v. Federal Rules on the Scope of Discovery and Proportionality

What is a Document? (Part III)

In several recent blogs, I have highlighted many of the differences between the Federal Rules of Civil Procedure and the Maryland Rules.  Those blogs are listed in Maryland v. Federal Rule Regarding a Mandatory Conference of the Parties.

The Maryland Rules regarding the scope of discovery and proportionality limits contain significant differences from the Federal Rules of Civil Procedure.

Clauses marked in “red” have no counterpart in the Maryland Rules.  Those federal provisions in bold font differ from the italicized Maryland counterpart. Those in “blue” are substantively similar but not co-located.

The scope of discovery provisions differ in a number of ways.  Federal discovery is “claim and defense” discovery while Maryland covers the “subject matter involved in the action, whether it relates to the claim or defense….”  Further while the Federal rules eliminated and replaced “reasonably calculated to lead to the discovery of admissible evidence” in December 2015, the Maryland rules retain it. 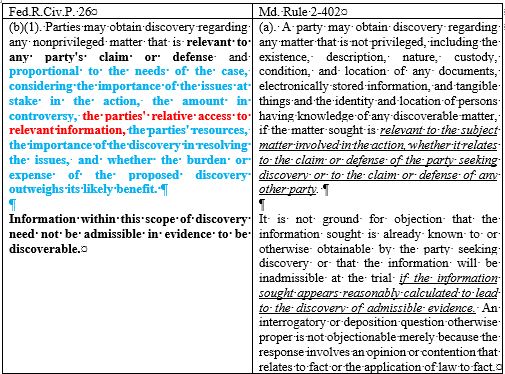 The proportionality provisions also differ somewhat.  While those factors were elevated to Fed.R.Civ.P. 26(b)(1) in December 2015, to emphasize their importance, Maryland has not done the same. 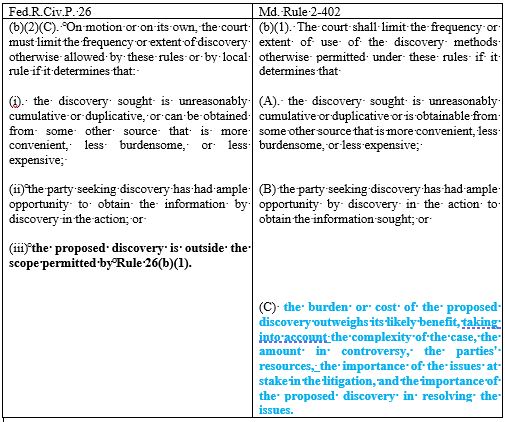 Additionally, Maryland mandates more specificity in a “not reasonably accessible because of undue burden or cost” argument: 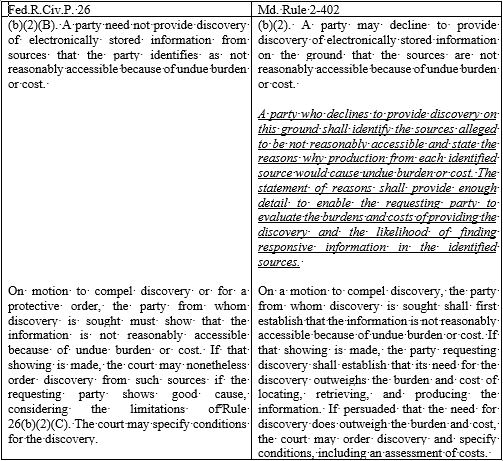 Not Reasonably Accessible Because of Undue Burden or Cost

These differences impact, of course, discovery.  They may also impact pre-litigation preservation decisions.

ABA Article Suggests a Need to “Preserve Everything”