In State v Sample, __ Md. __, 2020 WL 2316709 at *3 (May 11, 2020), the Court of Appeals of Maryland concluded that “that the standard of proof for authenticating social media evidence is the preponderance of evidence standard, i.e., there must be sufficient circumstantial evidence for a reasonable juror to find that it is more likely than not that the social media evidence is what it is purported to be.” The inquiry is “context-specific and the presence or absence of certain biographical information… is not necessarily dispositive….” Id. at * 17. The offering party need not rule out all other possibilities that are inconsistent with authenticity. Id. at * 17. “Requiring the State to somehow conclusively disprove that someone other than Sample was responsible for the unfriending would establish too high a standard for authenticating social media evidence. The State was not required to eliminate all possibilities that were inconsistent with authenticity….” Id. at *20.

The Court of Appeals of Maryland previously decided two social media authentication cases. In Griffin v. State, 419 Md. 343 (2011), it reversed a conviction, holding that certain social media evidence (a MySpace page) had not been properly authenticated. In a passage that has been both followed and distinguished, it wrote that:

The potential for abuse and manipulation of a social networking site by someone other than its purported creator and/or user leads to our conclusion that a printout of an image from such a site requires a greater degree of authentication than merely identifying the date of birth of the creator and her visage in a photograph on the site in order to reflect that Ms. Barber was its creator and the author of the “snitches get stitches” language.

In the next decision, Sublet v. State, 442 Md. 632, 636 (2015), the Court expressly wrote that it was elucidating and implementing Griffin. Sublet consolidated three appeals. In Sublet, the Court held that the circuit courts did not abuse their discretion in admitting or excluding social media evidence. The Sample Court described Sublet as follows:

Four years after Griffin, in 2015, in Sublet, 442 Md. at 678, 113 A.3d at 722, … this Court held that, to authenticate social media evidence, there must be proof from which a reasonable juror could find that the evidence is what it purports to be.

In Sample, the Court quoted the “greater degree of authentication” language and simultaneously followed the reasonable juror standard of Sublet. The Sample Court wrote:

In Sample, the prosecution introduced evidence that a robbery defendant had “unfriended” his deceased accomplice shortly after the robbery-gone-bad. The unfriending was offered to show that the defendant was distancing himself from the decedent. In Sample, two men attempted to rob a liquor store. The store owner shot one of them, Mayo, and Mayo died outside the store. The other man got away. Sample was arrested and charged.

While investigating the attempted armed robbery, a detective searched Facebook for a profile associated with the name Claude Mayo. Ultimately, the detective requested from Facebook, and received, “Facebook Business Records” regarding two Facebook profiles—“claude.mayo.5” and “SoLo Haze”— as well as a “Certificate of Authenticity of Domestic Records of Regularly Conducted Activity[.]”

While the decision describes those records in detail, in brief summary the records showed that SoLo Haze had unfriended Mayo a day after the robbery. Sample contended that there was no evidence that he – as opposed to someone else – had unfriended the decedent. The prosecution offered the evidence of “unfriending” to demonstrate that defendant Sample was attempting – one day after the robbery – to distance himself from the decedent, Mayo. The decision involved admissibility of information from two Facebook profiles, those of both Sample and Mayo. The Court wrote:

We hold that the circuit court did not abuse its discretion in admitting the Facebook-related evidence, as there was sufficient circumstantial evidence under Maryland Rule 5-901(b)(4) for a reasonable juror to find that the SoLo Haze Facebook profile belonged to Sample, that the claude.mayo.5 Facebook profile belonged to Mayo, and that Sample used the SoLo Haze profile to unfriend the claude.mayo.5 profile the day after the shooting.

The decision is instructive for the detail it provides regarding the evidence of authentication. Further, it demonstrates the sophistication of evidence presented, including surveillance video, FBI Cellular Analysis Survey Team testimony, and information obtained from Facebook. The dissimilarity between that sophisticated evidence in Sample from the simple screen shot of a MySpace page that was presented in Griffen demonstrates the steep learning curve of the past few years.

Sample is equally noteworthy for its reaffirmance of Sublet, Sample, 2020 WL 2316709 at *16-17, and its reliance on the Griffen dissents. Specifically, the Sample Court wrote:

In a dissenting opinion that the Honorable Joseph F. Murphy, Jr. joined, the Honorable Glenn T. Harrell, Jr. stated that he would adopt the test for authentication that nearly all United States Courts of Appeals, including the Second Circuit, had embraced…. Consistent with the … dissent in Griffin, 419 Md. at 366, 19 A.3d at 429 (Harrell, J., dissenting), for purposes of social media evidence, this Court adopted the “reasonable juror” test… See Sublet, 442 Md. at 671, 113 A.3d at 718.

In Footnote 12, the Griffen decision rejected, or at least distinguished, the “reasonable juror” standard of Sublet and Sample. As noted above, Griffen had suggested a “greater degree of authentication” requirement for social media. For example, in Footnote 13, the Court wrote: “We further note that authentication concerns attendant to e-mails, instant messaging correspondence, and text messages differ significantly from those involving a MySpace profile and posting printout, because such correspondences is sent directly from one party to an intended recipient or recipients, rather than published for all to see.”

It remains to be seen whether the Sample Court’s reliance on the reasonable juror standard, the Griffen dissents, and Sublet portends an end to Griffen and the “greater degree of authentication” requirement. A good argument to that effect can be made.  The Griffen approach was rejected in State v. Hannah, 448 N.J. Super. 78, 88, 151 A.3d 99, 105 (App. Div. 2016), citing Parker v. State, 85A.3d 682, 686-87 (Del. 2014), and United States v. Vayner, 769 F.3d 125, 131, n. 5 (2nd Cir. 2014); see B. Hogan, GRIFFIN V. STATE: SETTING THE BAR TOO HIGH FOR AUTHENTICATING SOCIAL MEDIA EVIDENCE, 71 Md.L.Rev. Endnotes 61 (2012) (“This holding improperly distinguished social media evidence from other forms of electronic evidence and suggested an artificially high authentication threshold for social media evidence presented at trial.”).

The Sedona Conference and Its Impact on E-Discovery 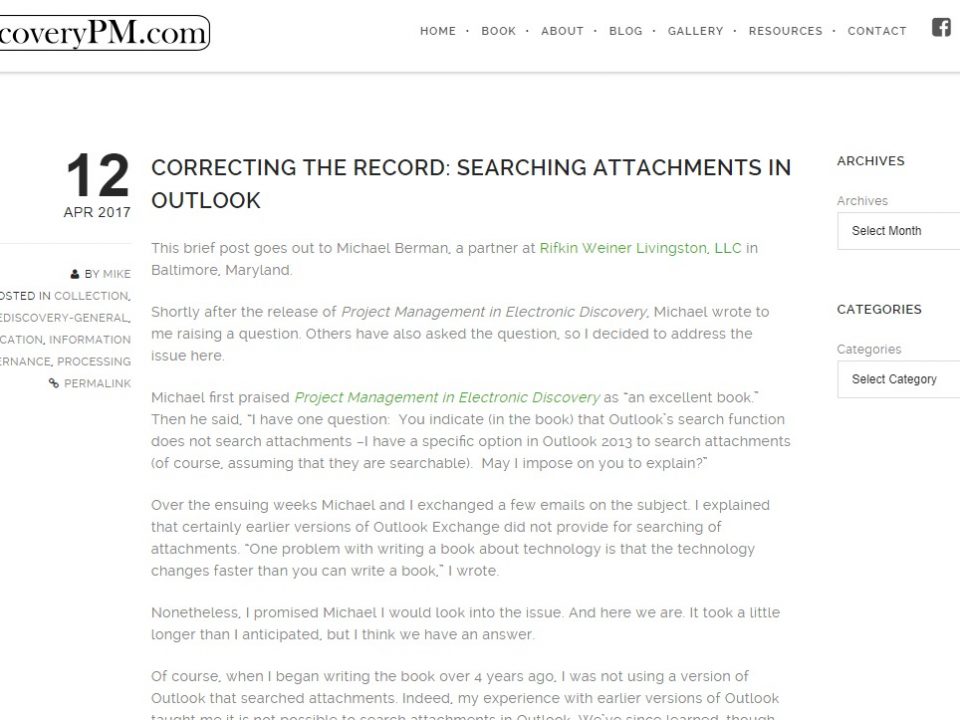