Thomas Jefferson’s “Metadata” in the Declaration of Independence

Recognized by Super Lawyers for 2022

Metadata has been embraced, loved, cursed, and vilified. It has been written about in inconsistent ethics opinions about “mining.” Failure to preserve or produce it has led to the imposition of sanctions in litigation.  It has been “scrubbed,”[1] sliced, diced, defined, and classified as application or system metadata and system-generated or user-created.[2]  It is so “scary” that Maryland State officials can strip it out of public documents before producing them under the State “sunshine” law;[3] however, litigants need it to auto-populate the fields of litigation review platforms and authenticate trial exhibits.

But metadata isn’t new. In fact, it was found in a draft of the Declaration of Independence.[4]

Thomas Jefferson wrote the phrase “our fellow subjects,” and then overwrote “subjects” with the word “citizens.  See Library of Congress, The Wise Guide : Subject to Change (loc.gov).

This – and other similar hidden documentary information – was uncovered by forensic analysis.  Researchers at the Library of Congress (“Library”) used hyperspectral imaging to uncover the hidden “data about data.”

“Hyperspectral imaging is the process of taking digital photos of an object using distinct portions of the visible and non-visible light spectrum, revealing what previously could not be seen by the human eye. Fascinating details of our historical heritage have been coming to light with the use of hyperspectral imaging. For instance, recent imaging of the heavily varnished and visually obscured 1791 Pierre L’Enfant Plan of Washington, D.C., has clearly revealed invisible streets and special locations, including the ‘President’s House’ and ‘Congress’ House.'” [emphasis added]. 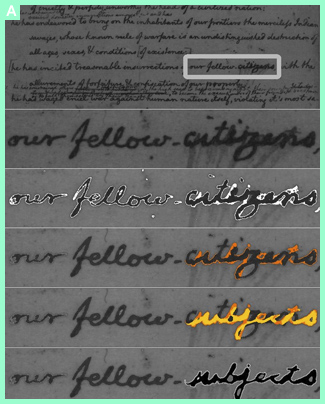 Jefferson’s metadata was important.  In its article, the Library wrote:

“The correction seems to illuminate an important moment for Jefferson and for a nation on the eve of breaking from monarchical rule: a moment when he reconsidered his choice of words and articulated the recognition that the people of the fledgling United States of America were no longer subjects of any nation, but citizens of an emerging democracy.”

The Library explains that, while the sentence did not make it into the final document, the concept did.  We were “citizens,” not “subjects.”  Researcher Fenella France described the discovery as a “spine tingling moment.” Id.

However, Jefferson tried to spoliate the evidence:  “Jefferson sought quite methodically to expunge the word, to wipe it out of existence and write over it.”  Jefferson changed ‘subjects’ to ‘citizens’ in Declaration of Independence (staugustine.com) (Jul. 4, 2010).  Fortunately, just like the “gang that couldn’t spoliate straight,”[5] he failed, and his newly-found effort is instructive, illuminating the thought process behind the document.

“Chronocentrism”  has been defined as “the egotism that one’s own generation is poised on the very cusp of history.”[6]

Much of what we think is new, isn’t so new.  The first online wedding wasn’t via Zoom; it was by telegraph in the 1800’s.  When Was the First Online Wedding? – William Storey and Clara Choate’s Love Story.  “Data about data” has been around for a long time.[7]

[4] “Jefferson submitted his ‘rough draught’ of the Declaration…. Congress eventually accepted the document, but not without debating the draft for two days and making extensive changes.”  Jefferson and the Declaration | Thomas Jefferson’s Monticello

[7] Of course, there has long been a forensic science of examining hidden characteristics of paper. E.g.,  Forensic Analysis of Paper or Paper Examination – Forensics Digest. For a history of paper, see D. Cycleback, Identifying and dating paper | Looking at Artifacts and Ideas (davidcycleback.com) (Feb. 10, 2013)(“A black light is effective in identifying many, though not all, modern paper stocks. This allows the collector and dealer to identify modern reprints and fakes of antique trading cards, posters, photographs, programs and other paper memorabilia. Many people buy a black light specifically for this purpose.”).

Is the “CSI Effect” Relevant in Civil Jury Trials?